R10 is slimmer and smaller in size. 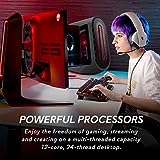 NO WORLD IS TOO BIG: Power through your favorite games or edit your favorite maps seamlessly with 32GB 3466Mhz XMP overclockable DDR4 memory

THE LATEST TECH: PCI-Express 4.0 provides graphics, storage drives and networking adapters greater bandwidth so that every component in this gaming desktop performs at their highest level

UPGRADED CHASSIS: A new chassis based on the Legend Industrial Design allows for liquid cooling and efficient airflow to reduce CPU temperatures with whisper-quiet operation

PREMIUM SUPPORT: We've made it easy to move all the good stuff over to your new PC, with 6 months of Dell Migrate