For performance iBUYPOWER Trace 5 MR 178i has a lot better processor. It also has more memory.

For portability Trace 5 MR 178i is lighter. It's also thinner and smaller in size. 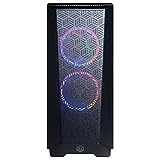