Compare HP Pavilion vs other Intel i5 gaming PCs: 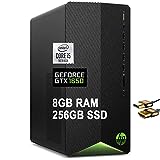 【Detailed Configuration】Substantial high-bandwidth 8GB RAM to smoothly run your games and photo- and video-editing applications, as well as multiple programs and browser tabs all at once. A flash-based 256GB SSD has no moving parts, resulting in faster start-up times and data access, no noise, and reduced heat production and power draw on the battery.

【Intel 11th Generation Core i5-11400H processor】The Intel Core i5-11400H is a high-end hexa-core SoC for gaming laptops and mobile workstations. It is based on the Tiger Lake H45 generation and was announced in mid 2021. It integrates six Willow Cove processor cores (12 threads thanks to HyperThreading). The base clock speed depends on the TDP setting and at 45 Watt is at 2.7 GHz. The single core boost speed can reach up to 4.5 GHz, all cores can reach up to 4.1 GHz.